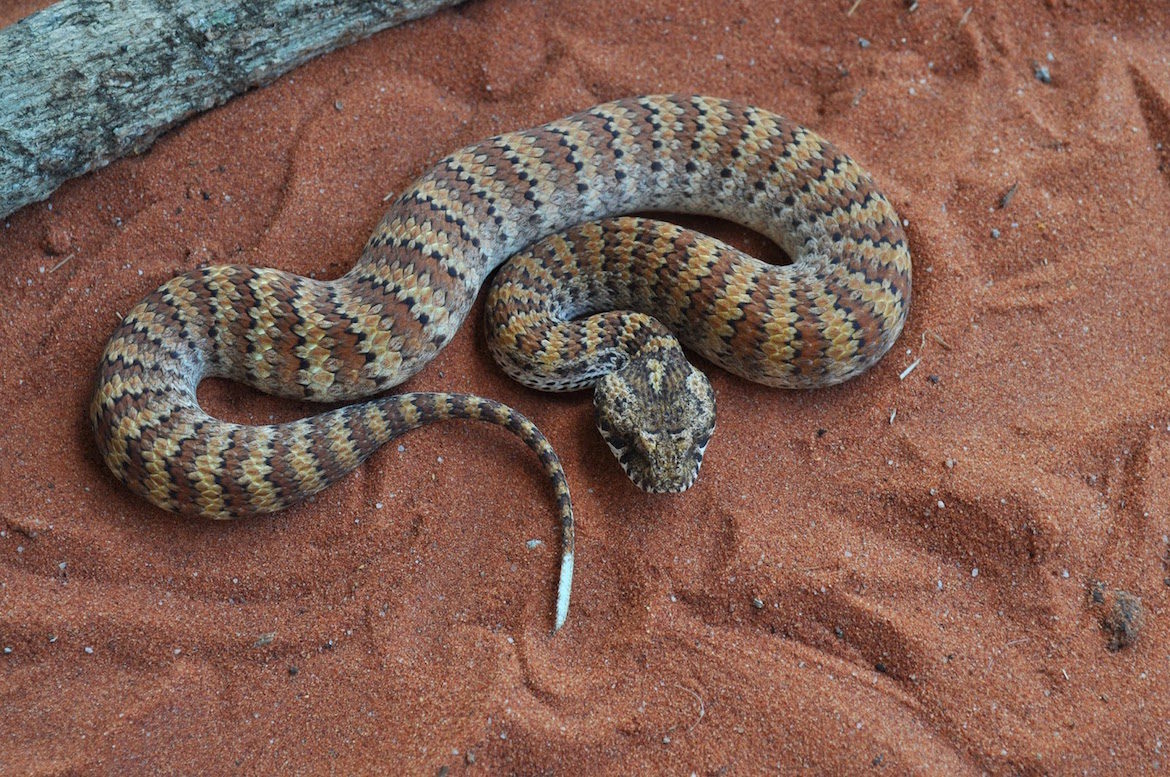 I soon learnt Death Adders were dangerous in more ways than one. The common belief among us school boys was that, once you were bitten by a death adder, you only had three minutes before your tongue went black, the whites of your eyes turned pink and you fell over and died in a writhing spasm. This belief sounded reasonable, so no one questioned its accuracy.

In a large preserving bottle was a big ugly brute. It had a wide triangular head, huge fangs and a thick bulbous body with a tapering tail. The grey, black and brown bands would help camouflage it as it lay in wait for its prey. The adder’s eyes seemed to follow us as we dawdled into our Year Six classroom. I knew it was dead and covered with formaldehyde, but I always gave it a wide berth. It had to be the meanest, thickest and wickedest snake that I had ever seen. Bertie Butterfly reckoned its real name was a ‘deaf adder’ as these snakes were stone deaf, but death or deaf, we all knew you didn’t muck around with them.

My first real encounter with one was the day I discovered that I had left my lunch at home. Rather than starve to death, I decided to break school rules and risk a quick bike trip home to retrieve it. I grabbed my trusty push bike and headed off.

The road was so hot that summer that the tar was melting and sticking to my bicycle tyres. When I reached the bottom of our hill, I rode up as far as I could go, before dismounting and pushing my bike at a run.

I was on top of the death adder before I realized it. I gave a shriek of terror and tried to put my right foot over my left shoulder. The bike crashed down on the road and I fled up the embankment.

The snake stayed still. From my vantage point of two metres up, I observed the scene. The death adder seemed stuck to the tar and was, apparently, dead. Gingerly, I crept down the bank and collected my bike. Once more, I resumed my run, though I kept a wary eye out for any other scaly reptile that might have been parboiled.

“Mum! Mum! There’s a death adder stuck on the road!”

The house was empty. She wasn’t home.

I gulped down my lunch and headed back to school, with a biscuit stuffed in my lunch bag.

The snake was still there, and that was the beginning of my downfall. How could I resist acquiring a new specimen for our science table? A handy stick was found, and the dead death adder was poked and prodded into my lunch bag, minus the biscuit.

I arrived at the school corner just as the line-up bell rang. All the students were gathered on the parade ground and, knowing that I’d be late, I parked my bike and snuck in the back door. I was peeved that I didn’t have time to show off my prize to my mates.

Upstairs, I stole a glimpse out the window and saw our class about to ascend the stairs, while the headmaster kept time with a marching drum.

Now, I thought, how should I introduce the snake to the class? Hmmm, why not share the fright that I had had? Without thinking too much, I lifted the lid of Frances’ desk and slipped the death adder on top of her books.

Kenny Curll bounded into the classroom, racing Ferret to be first. The others staggered in, aware that they had a few minutes to gossip before the headmaster could pack away the drum and stride to the classroom. Ferret took up his usual role of cockatoo, ready to call a warning when Old Thumper was in sight.

“Ah, mate, you won’t believe what I found! Come here.”

Curlly sauntered over to my desk. Before I could explain, Ferret sounded the alert.

Students dived for their desks to avoid a confrontation with the headmaster.

Frances and I tripped over each other to get to our shared double-desk.

The expectation was that we had to read quietly whilst awaiting the headmaster.

Frances gave me a smug look, lifted her desk lid, and put her hand in. Her hand touched something warm and clammy.

Her screech made my hair stand on end. Terrified kids ducked in all directions, screaming in fright and unison with Frances. Something terrible had happened somewhere.

Frances’ eyes widened. She paused for breath, then her shriek grew louder. Suddenly her bladder cascaded down her chair like Niagara Falls. She sprang to her feet and knocked over her desk. The death adder spilled into the jostling crowd.

Instantly the class realized why they were screaming. Additional yelps rent the air. Bodies pressed against the walls and a few pupils collided as they shot out the door.

“What the hell is going on?” bellowed the headmaster.

He was running down the corridor now.

“Stop it you idiots! Keep still the lot of you!”

Classroom conditioning kicked in. Instantly all was hushed. Students remained backed against the wall, warily eyeing the adder of death.

Frances, her chest racked with dry sobs, stood amidst a pool of piddle, her feet frozen to the floor. The death adder’s menacing gaze held everyone in fear, including the headmaster. I edged to the centre of the classroom.

All eyes swivelled towards me. Somehow, everyone knew I was the instigator of the chaos. I wanted to ooze down through the floorboards like the slowly receding pee.

“Britton, get that bloody snake out of here!” yelled Headmaster Nebone, forgetting about teacher decorum.

I picked it up on my ruler and once more pushed it in my lunch bag and left the room. Outside in the corridor, I could hear classroom order being restored. Desks were picked up and chairs straightened. Two girls led Frances out and down to the sick bay to change into something from the clothing pool. The three of them gave me reproachful glares. Frances was still softly sobbing.

Curlly came to fetch me, but the snake was to remain outside.

“Oh, man, that was marvellous,” beamed a delighted Curlly, “but boy, are you going to get it now!”

That afternoon I could hardly hold the handlebars of my bike. Three strokes of the cane on each hand had left them stinging and throbbing. Through my watery eyes, I couldn’t help giggling, despite the pain. As Curlly had said, it was an absolutely marvellous event.

It was sad, but Frances never ever saw the funny side of it.

Editor’s Note: I fondly believe that Roger, when he became a teacher of a small school in the 60s, must have experienced a huge wollop of karma from the behaviour of schoolboys in his classes.

“Snakey” by Roger Britton was last modified: June 13th, 2022 by Anne Skyvington
a boys' classroom story from the 50sa humorous story with an aussie flavouraustralian death adders are deadlyboys will be boyscountry childhood in the 50s in Australia
7 comments
0
Facebook Twitter Google + Pinterest

Yes, this is one of my Teachers’ College classmates from 1961-62. We’ve got back together through our love of writing. He writes about past experiences and asks me for editing input. But he’s needing this less and less of late. I’m fairly sure this is based on facts, perhaps slightly dramatised. Keep in contact.

Calling all creative writing editors!!! Given that they say that you shouldn’t use more than 1 or 2 exclamation marks within a story or novel, does that apply here, too? Should Roger delete some of these (!) within the dialogue as well, or is it made an exception therein?

Hi again, Carol. Visit me on Facebook. I still use my single name.https://www.facebook.com/anne.skyvington

Only knowing Roger these days through his writing (it’s fifty some years since I last saw him!) I have no doubt he would have given as good as he got. His pupils would have been at a disadvantage as any mischief they could have come up with he had already done and would have been ready for it. “Gotcha! Been there, done that, think again!”

With Roger the writing magnet seems to be pithy humour with just a tad of ribald or titillating misadventure. This usually paints Roger as the naughty boy who leaves his readers shaking their heads and muttering, “That damned kid!”

Exactly, Ian. That’s how I felt when I read it the first time. Do you think he got his when he started teaching, or was he just as bad at Headmaster Thumper?