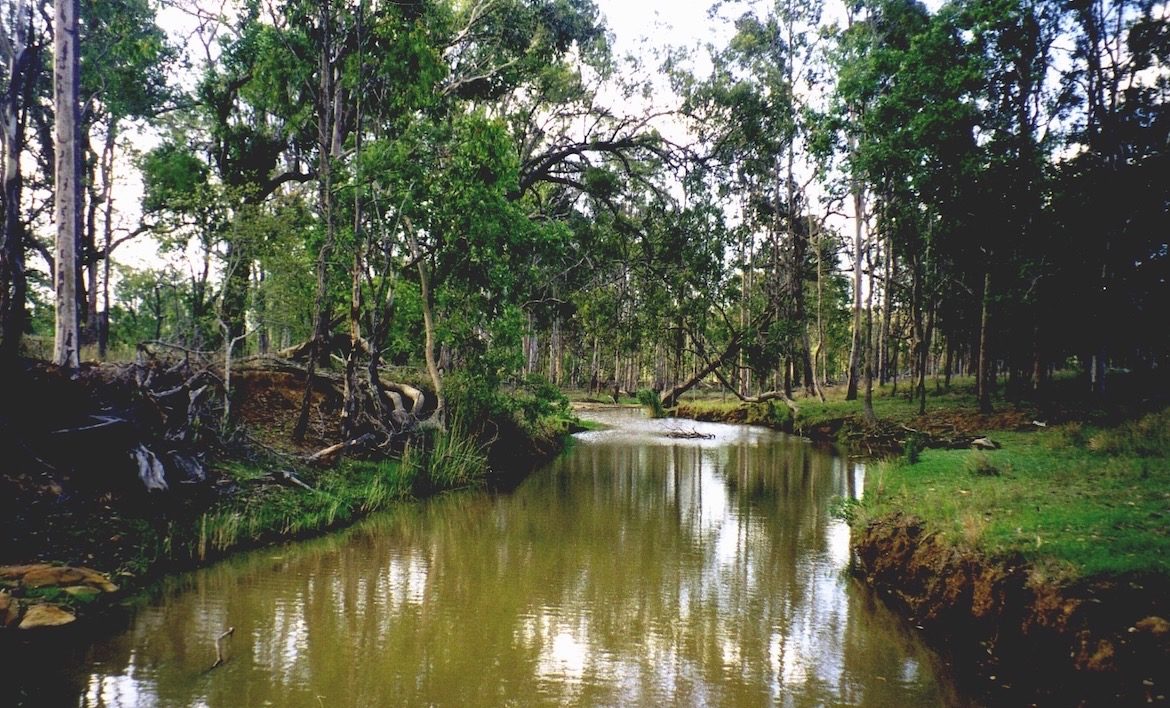 My very first water experience is in my mother’s womb. I’m safe, secure, warm. I swim, mermaid-like, do somersaults and swallow the magic fluid. I imagine that I’ll never leave this watery place. 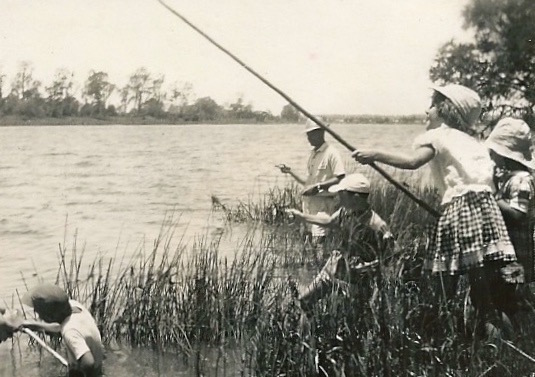 At Waterview the humid scorching air engulfs us; the heat, ruthless, tears at our skin and sends us kids scurrying towards water. My brothers swing Tarzan-like from overhanging scribbly gums, and jump into the creek on Dad’s bush paddock.  Launching ourselves from tree roots embedded in the banks, we dive and bomb one another scattering tiny snakes and tree frogs that hide in the depths. I jump in and feel the clay squelchy and squidgy between my toes.

I try to hide my fears of the depths and copy my brothers in derring do. Yellow belly fear, like the bloated green tree frogs with bulging eyes staring down from the rafters of the outhouse, ready to pounce, gobble me up; green waters swirling; amphibian annihilation.

I am Minny-Ha-Ha to his Hiawatha the Brave.

Often I was afraid of the dark. One time I screamed out in the middle of the night:

Dad races into the kids’ bedroom and flashes a torch underneath my bed. I want to crawl in between him and Mum in their double bed, but it’s out of bounds. I crawl in with Donny instead, snuggle up to his naked body; feel the flip of his penis like a lizard as he moves over to let me in; I fall into a deep sleep o contentment.

Early memories are bathed in warmth. I am sitting in a pink tub on the old wooden table in the kitchen next to the fuel stove. It is dusk. A golden ball of light sinks into the hills to the west. The warm water soothes my body. I splash my hands in it and crow.

Mummy laughs and rubs me all over with Lifebuoy soap, pours the water over my dark brown hair that is just like hers. The kitchen is bathed in a soft hazy glow. Mummy is listening for the jeep to pull up at the front. I listen too. We will hear him opening the wire gate and driving through into the back yard.

Mummy is laughing now at the black stallion through the window as it frisks and plays with the piebald and bay mares. Her laugh is the laugh of a naughty child. I don’t know what she is laughing at.

The kitchen is warm, warm from the heat of the stove and the last rays of the sun dropping in the west. And I sit in the tin tub waiting for the sound of Daddy’s footsteps.

He bursts in, eyes twinkling and red-cheeked from a beer at the pub, and goes straight to me, picking me up in those strong sun-browned arms and calling me his ‘Little Angie-Pangie’, tossing me up into the air and showering me with kisses. Mummy watches us.

One very early memory is of tombstone-like coldness. A nurse places my skinny body in a hot tub. I have Scarlet Fever. I’m hallucinating. A large black bull chasing me.

“Put her in hospital or you’ll carry her out in a box!” the doctor says.

It’s when the fear, the frozenness, first enters me. I’m taken away from my mother. They put me in a sterile ward in the hospital. It’s opposite the Grafton Gaol.

Daddy brings a tiny rabbit to the windowpane of the children’s ward where I am quarantined. It reminds me that goodness,  gentleness still exist the coldness and trauma.

At the end of three weeks, just before Mummy comes to take me home, a nurse places me in a tub of hot water. The sensation of my body afloat in salving water, remains with me to this day.

Not long after this, Daddy drives Mummy and me to Moree.  I am the littlest princess. Billy and Donny, five and six, are left at Grandma’s farm, directly across the Highway from our house.

There is one tourist attraction at Moree: the public baths. They’re not just any baths, but ones formed from natural salt springs hidden beneath the ground. Discovered when an engineer sank a drill in search of oil, the hot salt water spurted up like a miracle, an offering from the gods.

On the way back home to Waterview, I spy through the window of our car, a host of tiny snowflake white lambs dotted all around the fields with their mothers.

“I want a baby lamb! Daddy, Pleeease can I?”

Mum laughs. Dad stops the car and lets me take a closer look, but it does not assuage the terrible want, the aching hole like hunger, like unquenchabe thirst. I yearn to hold one of the babies in my arms, not merely drink it in through my eyes. In fact, the stopover makes me covet it all the more strongly and urgently, and I whine and cry for a lamb for the rest of the trip.

Mum is a bit deaf by this stage. “Just ignore her, Will,” she says. “She will stop after a while.”

“Here, have a lolly to suck on…” and she reaches into the back and sticks it in my mouth.

“I wan’ one!” my voice slobbery now, as well as whining, through the dribbles from the sticky crunchy peppermint stuck to my teeth.

For once my father, who rarely gave into our pleadings for things, seemed to consider the possibility.

“When I have time, I’ll make enquiries. Just give us some peace will you, Angie?”

And that is exactly what he did when we got back home. It was quite a sturdy beast, not the soft toy-like babies of the tablelands, but it was the gesture that counted. I wonder now, whether it touched a chord in him, something to do with his secret yearnings. “All I ever wanted was a mate to share my life with,” he told me once. Much later on.

But it’s the Moree baths I remember most of all.

Tirra Lirra By The River by Jessica Anderson

A Change of Blog Title

Serendipity at the 2017 Sydney Writers’ Festival

Everybody, in a sense, is either investing or wasting, all the time,
every day. Seraphinite can accelerate healing due to
an ability to bring light energy into the DNA and pulling higher vibrations into the subtle bodies.
The metaphysical hub of the American southwest, maybe even the world.

Fancy you having Scarlet Fever too! It must have been more common than I had thought. Did you also have to learn to walk again? I do worry about such serious illnesses making a comeback.

Hi Lynne
Yes, but the doctor said it was measles turning inwards! I didn’t seem to have any nasty after-effects, except that I have always felt the cold more than others in the family. Thanks for reading my stuff. It means a lot to me.