At the Swimming Pool 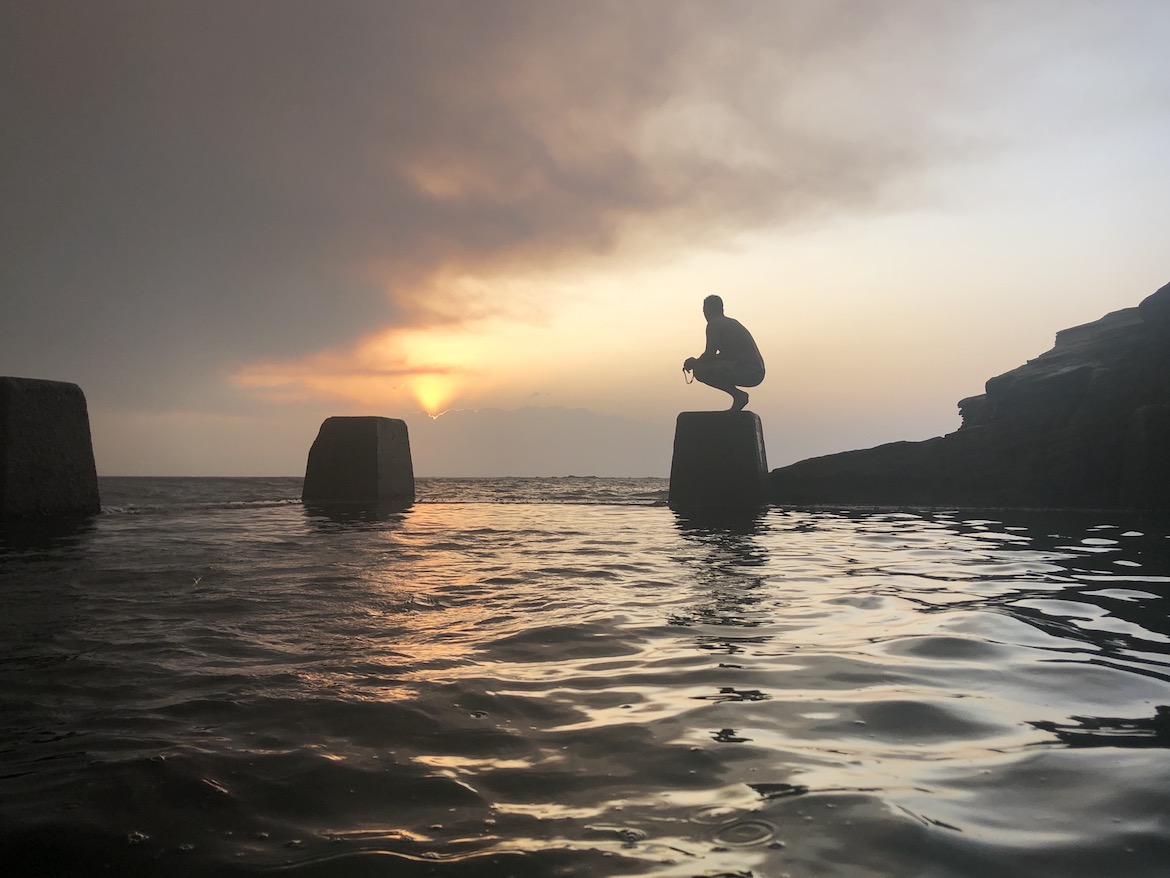 Jeanie is one of these inch worm types. One toe in; one toe back. The cold has always been alien. From birth, really. Even today, with the water temperature around twenty degrees. Babies are gurgling in mothers’ and fathers’ arms in the pool, for God’s sake.

Cassius with the lean and hungry look is descending the stairs. Italian background, perhaps? You can’t help but notice him. He’s wearing long black tights. Nothing else. She sees the bulge as he mounts the cement block. Has he come from the yoga centre up the top? The Breathing Space? That would explain the tights.

A shallow dive from his perch on high. Shallow depth at this end, mind. Heart-stopping … gasp…! The thin man’s head emerges intact, midway down the pool. No problem. She breathes out, a sigh of relief.

Breaking the ice is the problem for Jeanie. Rubbing water on her legs, her arms. It doesn’t help much. She flinches. Retreats, as a small child jumps in, splashing her.

Immersing the neck and the head is the worst. Actual pain. What a waste, if you’ve just washed and primped your hair. Still, it’s over once your hair is wet.

She knows … knows it all…. Enlightenment, even, doesn’t help.

Cassius is doing laps. Such style. Such graceful ease, the arms arced at the elbows, breathing in and out on either side.

She’s immersed now in delicious liquid. The whole body baptised. Is the water getting warmer? Or has her body adjusted to the cold? There are warm spots in the water. Do adults urinate in the pool? Babies and children, perhaps? She thinks of the French word for swimming pool: “piscine”.

Jeanie notices people. The matriarch with the white cotton hat. Standing in the water up to her neck. Watching. Greek background? German, perhaps? The middle-aged man with white hairs on his shoulders, like a bear. A new baby makes swimming motions, safe in its father’s grasp. Little arms and legs moving back and forth like a turtle. The French family, doing perfect Australian crawl.

Cassius is heading for the block again. Another shallow dive. Effortless. She breathes through it this time, knowing now that he knows how to avoid smashing his head on the rocky bottom. Crimson blood rising to the surface.

The white-hatted woman stares at him. Frozen. He meets her gaze. She points to the signage at the steps of the pool. Dozens of small icons. Jeanie follows the direction of the sharp finger. Hard to see from here. A dog with a slash across it? A diver with a red cross through it? Is there one for urinating? She thinks not.

‘Diving is not allowed in here,’ the woman scolds, ‘it says so on the sign.’

‘I know how to do it,’ he says, ‘without hurting myself. From years and years of practice.’

He’d chosen a space when it was clear of bodies too. No children in the way.

‘It is to protect others,’ she says. ‘Children … from getting hurt.’

Jeanie can see both sides, now. She’s seen teenagers jumping and skylarking from the high cliffs at the Surf Club side of the rock pool here. No one’s ever said anything to them. Not even the lifesavers.

As she treads water, half-wading, towards the end of the pool, she meets his gaze. Dark eyes. Intelligent. Brooding?

‘It’s just a case of fear,’ she murmurs, ‘about people hitting their heads…’

‘I don’t care,’ he says, ‘about other peoples’ fear.’ She flinches inwardly, desiring to know more. Perhaps he’s read that recent book she’s seen somewhere: The Subtle Art of Not giving a F*ck”. Four-and-a-half stars on Amazon. She might download the kindle version. Much cheaper, really.

She wants to ask questions, find out more about him, but he’s off, probably sorry that the words have escaped his secret mouth. Smoothly tanned, his hair a little longer than the norm, but neat.

She watches as he springs out of the pool at the deep end. Lithe. Self possessed.

On the rocks that lead down to the water’s edge, Cassius sits in a lotus position, facing out to sea. The Pacific Ocean, not always, though, she thinks. Sometimes even antagonistic.

But today it is tranquil. Calm as its namesake.

In profile, like a sphinx, Cassius is lost in meditation. Upright, lean and spare, solar plexus taut, his body merged into head and bust. Toes sticking out at the end of legs that have disappeared.

She has read about the kundalini, a dormant energy inside all of us. When she googled it, she found the word ‘dharma’, ancient Buddhist teachings, and the expression:

‘The figure of a coiled serpent—a serpent goddess not of gross but subtle substance’.

Lovely words that have stuck in her mind. Words of poetry. Not to be confused with reality, of course.

Looking at the sphinx man, she imagines the snake uncoiling secretly within, tries to see the movement on the outside of the belly. Nothing. Not a move. Not a flicker. The surface hard and still.

Other words come to her now, slipping like small blue sea creatures out of the slumbering unconscious of her mind. Something about the thousand-petalled lotus at the crown of the head. Waves of light and energy coming from the lowest point in the body, to the seventh at the top.

‘And with each awakening, the psyche of the person will be transformed.’

She moves away to the other end of the pool. To the shallows. When she looks back to the rocks at the deep end of the pool, the sphinx-like man has gone.

The next day is Friday. There is nothing in the flat to eat. She hasn’t eaten breakfast, so by lunch time, Jeanie is ravenous. She dresses to go to lunch and then have a swim in the pool. She walks to the end of the beachfront and orders a late lunch at the restaurant on the esplanade above the pool. Expensive, but it can’t be helped. She will take half back for her flatmate.

She’d planned to go for a swim straight after lunch. But something leads her to look at the program for the Yoga classes in The Breathing Space, nextdoor to the restaurant.

The world is the great gymnasium, where we come to make ourselves strong, Swami Vivekenanda it reads out the front.

She walks into the yoga room. A lovely warmth engulfs her body. She finds a spot in the corner at the back of the class, places her beach towel on the floor. The sun is streaming in through glass windows. She takes off the tee shirt she’s worn over her swimsuit. She sits cross-legged, her palms facing up on her thighs.

Straight-backed and peaceful, she thinks of the sphinx-man at the pool.

The meditation teacher is a plump, motherly type in soft cotton harem pantaloons and a flowing jacket. Belly fat oozes over her waist. She exudes love, her voice soft and maternal.

It isn’t necessary to close your eyes, the matriarch is saying. Better to remain open, so as not to fall asleep. She feels spirit arise from deep in her belly.

A lit candle glows in front of Jeanie. There’s a strip of paper at her feet with a wisdom mantra on it: OM A RAPA TSA NA DHIH: ‘May the wisdom mind find you’ or something like that.

Her heart swells within her breast. She closes her eyes. She notes the video at her forehead, flickering on and off in tune with the woman’s voice. The colours are those of the rainbow, pink, green, orange, that flood the shapes in her head.

The serpent goddess of subtle substance slides into her mind.

The lulling voice of the teacher is telling them they can lie down now.

She is talking about love now. About sending loving rays out towards friends, acquaintances, nemeses. Transmitting love direct from the heart.

Would the objects of her love receive the message? It doesn’t matter.

Will the sphinx-like man be the object of her transmitted love? Why not? If she saw him again, would she recognise him from the brief encounter at the pool? It matters not. The love is all that matters.

Perhaps it was he who had brought her here. She never would have thought of coming, otherwise.

Was he real, or was he an illusion, like so much about life and love?

One foot in front of the other; no need to hurry; try to live in the present time, brings her back to the swimming pool and to her inch-worm approach to life. And to the Sphynx-like mystery man who seemed to ratify her way.

This story was first published on Denise Baer’s blog: (http://baerbookspress.com/), along with other song theme-based stories.

At the Swimming Pool was last modified: August 2nd, 2022 by Anne Skyvington
how many parts make up a short story?is the halfway point important?Who was Cassius?Writing a short story
0 comment
0
Facebook Twitter Google + Pinterest

Voices From the Past